How does the Synthetic Refrigerant Additive (SRA) Affect Maintenance and Wear?

1. There are two synthetic catalysts in SRA:

a. The major component is one which removes the oil-fouling plaque. This plaque is extensively described by ASHRAE.

b. The second is an advanced lubricity agent.

The advanced lubricity agent is several generations ahead of PAO synthetic oils such as Mobil1. It extends bearing life, and an SAE-Certified laboratory test shows a 54% increase in compressor oil lubricity by use of SRA.

2. After treatment with SRA, you will typically observe a decrease in compressor power consumption of between 2% and 6%. In addition, reductions in compressor temperature of 20°C (40°F) are common. 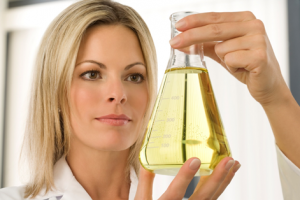 5. SRA will clean and restore older systems of oil fouling residue on internal components such as expansion valves. The components of SRA will help extend equipment life and reduce maintenance costs.

7. SRA has no effect on gaskets, seals, insulators, or any other component of the refrigeration system.

8. Typically, the compressor oil will last up to 50% longer between oil changes after treatment with SRA. This is due to less operation time, cooler operation, and lubricity compounds that extend oil life. Customers are encouraged to alter their preventive maintenance procedures to have oil tested on a regular basis rather than being changed on a regular basis. Reduced oil changes will save money for purchase of replacement oil, save labor and call out charges for changing the oil, and save disposal costs to eliminate the old oil which is generally classified as hazardous waste. The reduced frequency of oil changes is a “hidden savings” of SRA.

9. Since the air conditioning system cools the space faster after having been treated with SRA, the air conditioning equipment runs up to 20% less time than prior to treatment with SRA. Less run time is the way in which electricity is saved. Since the system is running 20% less, all normal annual maintenance costs are reduced by about 20%. Costs are reduced, from changing air filters to coil cleaning, to normal wear of components such as contractors, parts, labor, and so on. The equipment runs 20% fewer hours per year, so it is likely to last at least 20% longer. All regular maintenance intervals can be extended since the unit will run 20% fewer hours.